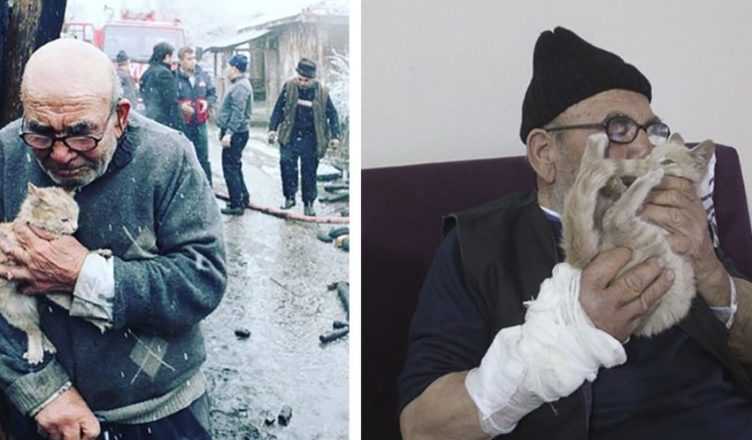 Ali Meşe, an 83-year-old Turkish man, lost all he owned in a terrible fire. The image of him sobbing over his cat as they helplessly watched as his house burned down went viral throughout the world.

Last week, something went wrong when Ali Meşe tried to turn on the heat, resulting in an explosion in the living room that set fire to the house. The family’s one-story wooden home caught fire, leaving them without a place to live.

Just in time, firefighters were able to save the man, his wife, his son, and their cat. Grandpa grabbed his terrified cat and wouldn’t let go because he was so upset over losing his house and everything he owned.

The man and his faithful cat give one another support in the video.

Meşe was later taken to the hospital to receive treatment for minor wounds. He was reunited with his beloved cat in the hospital. He expressed his joy at learning that the young child was doing well by hugging and loving the cat.

The Turkish Red Crescent brought a new pet carrier and other materials to the hospital to help the kitten deal with everything.

Meşe observed an outpouring of affection and support for both his family and his gorgeous cat.

After being hospitalized, the doctor had already given him the all-clear. He and his family are staying at his daughter’s house while they build their new home in the hamlet.