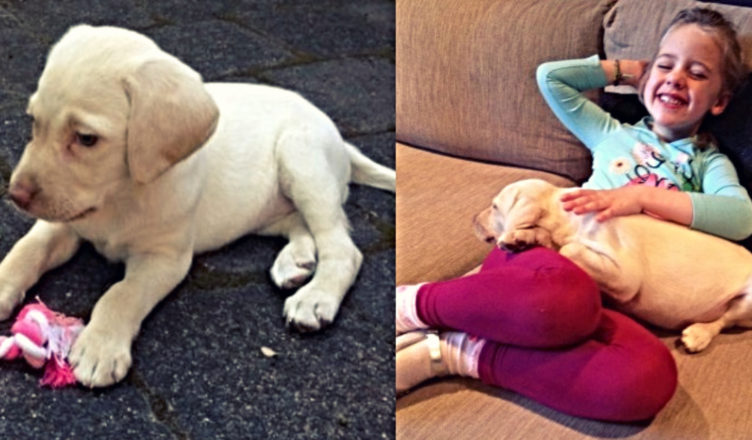 This story took place in Melbourne and for a short time it became almost the main topic of discussion in this part of Australia. One morning, the Hood family went on business, and when they returned home, they found out that they were robbed.

The notebook, jewelry, and other valuable things were stolen, but what was a real shock was that the criminals took Jacky with them. A 2 month old Labrador puppy, a favorite of the whole family, which caused the indignation throughout the area.

How long does it take to get used to a pet and love it ? 4-year-old girl Maya had a week, she literally did not let the dog out of her hands, constantly played and slept with Jacky. The adults also got used to the puppy with all their heart and when they were giving interviews to journalists, they could not hold their tears. According to the mother, her daughter, as if in a dream, goes out into the yard and calls Jacky – the child’s mind refuses to accept that her friend is no longer there. The story instantly spread to neighbors, and then to social networks.

The value of the puppy is not great, it was an ordinary dog, even stolen electronics cost more. But the family made an open announcement  – nothing is needed, just return Jacky home! This became a real challenge for the local police and not for the reason that the citizens expected that they would certainly come to help the little girl.

The puppy was vaccinated and had an implanted microchip, so if it was brought to the vet or if they tried to sell it, it would be easy to catch the criminals. The instructions were handed out, but time passed, and there was still no trace of the puppy.

It became obvious that the criminals were biding their time. And that they took the puppy with them for a reason, so the police went to some kind of trick. A wide campaign was launched on social networks describing the details of the incident and requests for assistance in the return of the dog. Not a word about punishment, but in a large text the information about Jacky’s microchip was mentioned. And a few days later a miracle happened – in the morning the girl’s mother noticed a familiar silhouette in the garden. Either the conscience woke up among the thieves, or they were afraid of punishment, or someone else found the puppy and threw it into the garden. The Hood family do not care about this fact deeply. The most important thing is that Jacky is back!