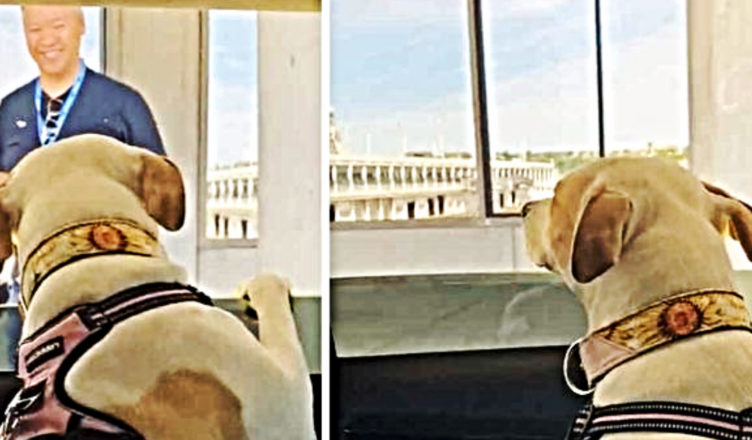 The video begins with the camera pointing out the front of a car. The caption “My service dog hasn’t seen her grandparents in a week since they went on a cruise” is shown on-screen.

The camera quickly pans over to Autumn the pibble, who’s relaxing in the car. Autumn doesn’t know where they’re going, but she’s more than happy to come along for the ride. However, her routine ride is about to get a lot better!

As the pair pull up to the oceanside, we see a massive cruise ship towering over the parking lots, trees, and buildings beside it. “There’s their ship,” the captions read.

By this point, Autumn is up and awake. Her owners, noticing that she’d been looking a bit down, have opened her window so she can enjoy a nice breeze during the ride.

The car begins to slow down, and Autumn’s ears perk up when she notices something. Her grandparents are waiting on the sidewalk next to the road! As the vehicle slows to a halt, we see Grandpa wave hello.

Autumn is obviously overjoyed and leans out the window so that she can give Grandpa and Grandma kisses. The service dog is entirely focused on their pair as they begin to load their belongings into the car.

She continues to try and get all their attention, going in for the week’s worth of cuddles she’s been missing. We can definitely tell she’s glad to see her grandparents again: what an adorable reunion!