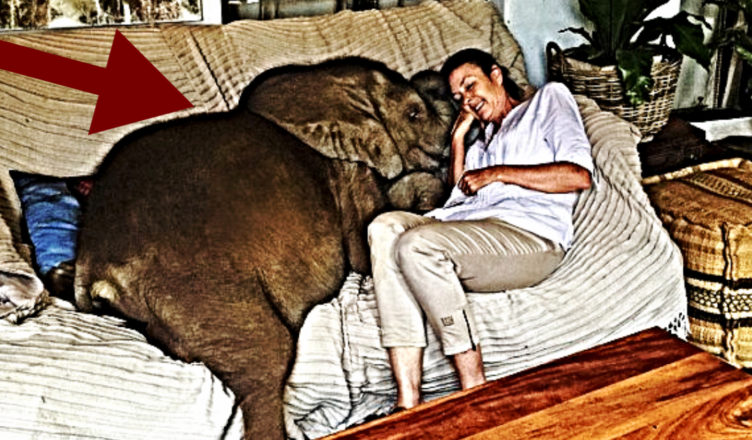 Moyo was saved from drowning while trying to cross a flooded river when she was only a few days old. She was also abandoned by her pack but, luckily, rangers found her just as a pack of hyenas had surrounded her. The hero rangers took Moyo to the ‘Wild Is Life’ sanctuary, whose founder Roxy Danckwerts became the orphan’s new mom.

Now, Moyo who is 14 months old, follows Roxy everywhere she goes.” She knows my voice, my smell and somehow knows where I am at all times,” said Roxy. “How, I have no idea!” It’s getting trickier with time because Moyo keeps getting bigger and her raids around the house are more difficult to handle.

“She is one of those animals with whom I have formed an extraordinary bond of friendship, trust and love,” said Danckwerts. ” Letting go will be hard. However, I am so determined and so sure of this road that I have chosen. I want the best for the elephant children, and that best is freedom to roam and to make their own choices.”

Abandoned by her herd in her time of need, baby Moyo was found surrounded by a pack of hungry hyenas.
Luckily, the rangers came just in time and took her to the Wild Is Life sanctuary, whose founder Roxy Danckwerts became the orphan’s new mom

Or even how strong she is…

For the full story, watch the video here: