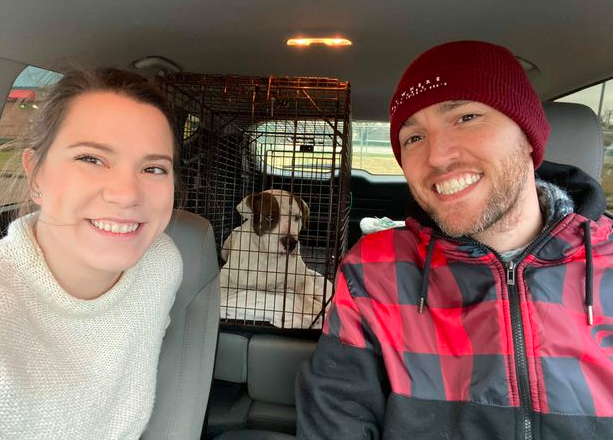 When he was taken from the shelter, the dog refused to cross the threshold and was afraid.

Therefore, the new owners had to fight for the trust of the pet.

The vet found Boomer had heart problems and an ill-healed leg fracture.

The dog also had old scars from being shot at. It is not surprising that after that he was afraid of people and trust.

In addition, the new owners believe that the dog is afraid to enter the house, because once he was severely punished for this.

Boomer was one of four stray dogs living among humans who used dogs “as target practice”.

The fate of the four-legged was changed by Samantha Zimmer, who decided to take him to her home.

At first he refused to follow the woman, so she had to lure him with a treat.

In the new house, Boomer did not want to leave the cage and cross the threshold.

“It was clear that it was forbidden for him to enter the house, and he wanted to enter,” commented Samantha Zimmer.

For a whole month, Samantha tried to convince Boomer that she was not an enemy for him, and he could trust her.

This helped the dog to step over the threshold. Now he not only quietly runs around the house, but also loves to lie on the couch with his new family.