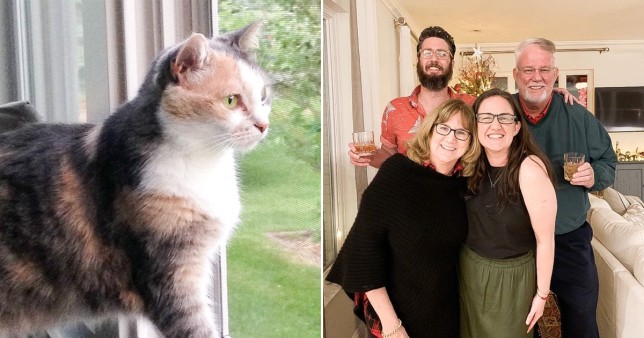 Alive and unharmed, the cat Kitty did not understand the great joy of her owner and did not even guess that just a few hours ago the family had buried her in the garden.

And very soon her husband found the remains of an animal not far from the house, which, apparently, was run over by a car.

The woman was beside herself with grief. She loved Kitty very much and decided to arrange a touching farewell ceremony in order to worthily see off her favorite on her last journey.

The cat was buried in the garden to the loud sobs of the frustrated owner.

What was Cheryl’s surprise when, just a few hours later, she found her cat at home.

Kitty was safe and sound, and did not seem to understand the behavior of her owner, who was now overwhelmed with joy.

The body of the buried animal had to be dug up and taken to the veterinarian. Cheryl hoped that the doctor would be able to identify the owner of the dead cat from the microchip.

But the clinic revealed an unexpected truth: it’s not even a cat, it’s a rabbit!

The doctor suggested that the family cremate the remains of the animal, but Cheryl refused, saying that a beautiful grave had already been prepared in her garden for the poor animal.

On the same day, a second funeral took place. And now the unfortunate rabbit rests in the backyard of an apartment building.

Cheryl was embarrassed by the whole story and asked the children not to tell anyone about what happened.

But her 35-year-old son Eric could not resist and posted screenshots from the family chat on social media.

His post quickly attracted the attention of users, collecting almost 800 thousand likes in a few days.