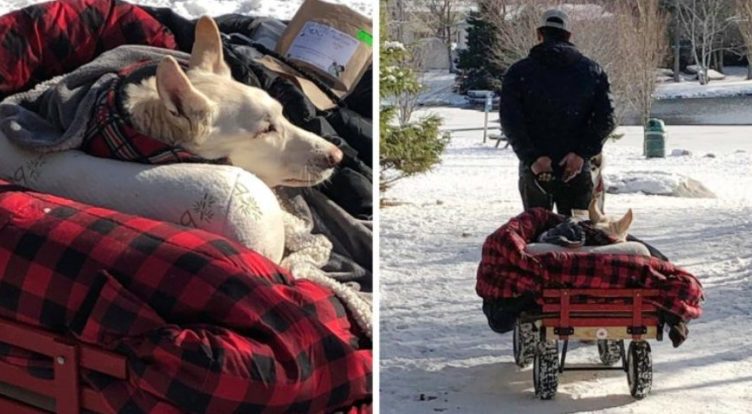 When you love someone, there’s nothing you wouldn’t do to make them happy.

Bryan Thompson was walking through Shubie Park in Dartmouth, Massachusetts when he saw something unusual.

A man was pulling a cart, and in the cart, wrapped up and tight as possible, lay a dog. Thompson was intrigued and after taking a few pictures he decided to satisfy his curiosity and approach the man.

What he learned was both beautiful and sad. The man told Thompson his pup had ALS.

The man’s dog couldn’t walk, but he didn’t want her to be deprived of the outside world and miss the fresh air, adventure, and joy of going to the park.

So he decided to take his pup in a wagon and give the sweet girl her daily walks that way.

Thompson was touched by the man’s love for his dog and spoke about it on Facebook.

He said that when he praised the man for his actions, the man just said his dog would have done the same for him.

It is absolutely beautiful to see such a pure expression of love and kindness and such a strong bond between a man and his dog.