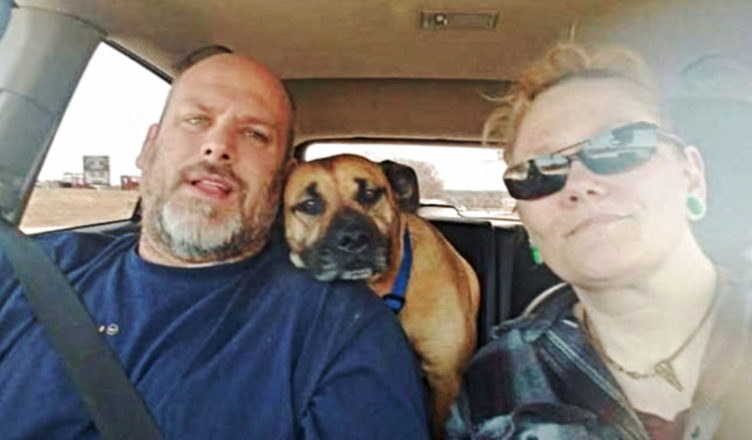 This pup made the best decision ever! Truly life changing!

River truly chose the right door to step through! Even more special!! She picked you.❤️❤️

Sometimes you just have to take a chance and hope for the best, and that’s exactly what this pup did. The stray pup was hanging around a gas station when she noticed that one of the cars had its door open.

The pup then made a quick decision that would change her life forever; she walked over to the parked car and jumped inside. Once inside, she made herself comfortable and curled up on the seat.

Angela Shaver
Once inside, she made herself comfortable and curled up on the seat.

Moments later, a man named Bill Shaver approached the car and was surprised to find that he’d unknowingly picked up a furry little hitchhiker.

Shaver had stopped at the gas station for a quick bathroom break and had not expected that anything would happen in the time it took him to use the bathroom and hurry back to the car.

But, as Shaver found out, you never know what life has in store for you.

Angela Shaver
The stray pup instantly won Shaver’s heart and he was flooded with feelings of pity and compassion.

The poor pup was heartbreakingly thin and clearly had no desire to ever leave the safety of the car.

Judging by the dog’s condition, the pup was all alone in the world, and Shaver decided to help her.

Shaver texted his wife and asked her if he could bring the pup home with him.

His wife quickly agreed, which didn’t come as a surprise to Shaver; over the years, the couple has made it something of a habit to rescue animals in need.

When Shaver returned home with the pup, the stray was reluctant to leave the car.

To make it easier for her, Shaver gently picked her up and carried her in his arms and brought her to the backyard.

Shaver and his wife named the pup River and were so happy to get to make her part of their family.

And the first step was making sure that River felt comfortable with her new siblings; the couple already had three other rescue pups.

They didn’t want River to feel scared or unsafe, and so they gently introduced river to her new family members and made sure that she felt comfortable around them.

Angela Shaver
Once they felt sure that River didn’t feel unsafe, they brought the pup into the house and began the process of giving her a bath.

The poor girl was absolutely covered in mud and blood and was littered with ticks, but after a nice bath, she looked much better and was ready for a tasty meal and a good nights rest.

River had deep wounds on her neck and was unhealthily thin, so after River had gotten to rest and readjust, Shaver took her to the vet for a check-up.

There, the vet revealed that River had both tapeworms and heartworms, and gave her some medicine to get her back in tip-top shape.

After that, all River had to do was get used to her new way of living.

And the little girl quickly embraced her new home and family.

The first morning in her new home, River bravely explored her new house, and though she was a bit nervous at first, it was clear that the little girl would be okay.

She trusted Shaver and his wife with all of her heart and sought them out for love and comfort whenever she needed some extra reassurance.

She loves playing with her puppy siblings and she’s so grateful to her mommy and daddy for saving her and giving her a wonderful new life.

Every day, she comes out of her shell a little more, and it’s clear that she has a bright and happy future ahead of her filled with love and comfort.

River truly chose the right door to step through!